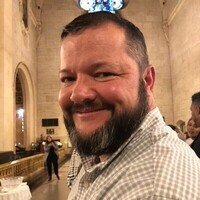 William E. “Will” Willmon, 46, of Topeka, passed away on October 23, 2021, at the Columbia Medical Center in Columbia, Missouri. He was born in Kansas City, Kansas on August 27, 1975, the son of Paul E. and Virginia Lee (Leonard) Willmon. Will served admirably with unshakeable dedication as an Aviation Mechanic First Class retiring from the U.S. Navy after twenty years of service in 2015. He served in Operation Enduring Freedom and was awarded the Afghanistan Campaign Medal, NATO “ISAF” Medal, Global War on Terrorism Exp. Medal along with many other citations. He was currently working for the Burlington Northern & Santa Fe Railroad as a pipe fitter. Will’s passions were riding his motorcycle, KC Chiefs, helping anyone in need, and hanging out with friends and family. His birthday was always a big event. He enjoyed playing Santa during Christmas time. He married Bernadette M. Zabala in Silver Lake, Kansas on April 2, 2010. She survives. He is also survived by six children, Joshua Willmon, Khaia Willmon, Chris Martindale, Bryce Martindale, Khandis (Al) Cordova, and Preston Martindale, two brothers, Mike Gile and Frank Gile and one sister Kathleen (Ronnie) Norris. He was known as Papa Willy to his grandkids and was loved by all his nieces and nephews. He was preceded in death by his parents, a sister Anna Gile and a brother Kevin Gile. Will will lie in state on Thursday, November 4th at the Brennan-Mathena Funeral Home where the family will receive friends from 4-8 p.m. and a sharing of memories will begin at 6:00 p.m. Graveside inurnment services with military honors will be held on Saturday, November 6th at 11:00 a.m. at Mt. Calvary Cemetery Memorial contributions may be made to the Capitol Federal Bank to assist his daughter. They may be sent in care of Brennan-Mathena Funeral Home, 800 SW 6th Ave., Topeka, Kansas 66603. Online condolences and fond memories may be left at www.brennanmathenafh.com.
To order memorial trees or send flowers to the family in memory of William E. "Will" Willmon, please visit our flower store.