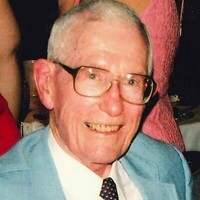 He was born in Paxico, Kansas on September 9, 1920 the son of John H. and Rosa (Glotzbach) Michaelis Jr.

He served in the U.S. Army/Air Force as a Staff Sergeant with the 3rd Bomber Commander Headquarters.  He was the training commander for pilots heading for overseas duty at the MacDill Field AF Base.  After the service Walter received a degree in Business Administration from the University of Kansas.

Walter owned a Western Auto Store in Topeka.  He had also worked for Clemmons Engineering, City of Topeka Waste Water, and was the Administrative Assistant for Capper Publications which later became Stauffer Publications.

He was a member of Most Pure Heart of Mary Catholic Church.

Walter married Geraldine Neuner at Most Pure Heart of Mary Catholic Church on April 25, 1955.  They shared 65 years of marriage.  She survives.  He is survived by a sister, Roberta Kraus of Topeka, as well as numerous nieces and nephews.  He was preceded in death by his siblings, Leonard, Julius “Mike”, Francis, Hubert, Carl, Elizabeth “Elsie”, Leona and Mildred.

Private services will be held for Walter and Geraldine Michaelis at Most Pure Heart of Mary Catholic Church.  Interment will be in Mt. Calvary Cemetery.

Memorial contributions may be made to the Michaelis Scholarship Fund and sent in care of Brennan-Mathena Funeral Home, 800 SW 6th Ave., Topeka, Kansas  66603.

To order memorial trees or send flowers to the family in memory of Walter J. Michaelis, please visit our flower store.