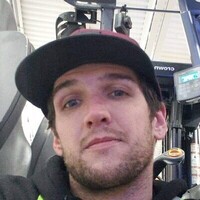 Tyler was a 2007 graduate of Bayshore Prep in Carlsbad, California. He was currently attending Full Sail University online where he was studying Computer Technology and Graphic Design. Tyler was excelling at his job as a Service Technician with Terminix.

After 6 short hours of labor he made his way into this world and changed the lives of all those around him. Tyler cried and cried until his daddy leaned down to his new son and said “Hello Tyler, I’m your daddy”. Tyler stopped crying instantly and grabbed his dad's finger. In that moment the world became so much brighter. He was so adorable with his blonde hair and icy blue eyes. He was such a smart little baby and amazed his parents every second of every day. He started walking on his first birthday, and has been on the run ever since. He sure was a silly kid, and was wise beyond his years. He was known as an "old soul." As a child he loved to play baseball and run around base housing with his friends. He loved taking yearly camping trips to the family’s favorite spots in California, and summer road trips to visit his grandparents and the best friends that anyone could have, his cousins. He was the protector of his two siblings Shelby (30) Zach (24). Whenever they needed him, he was right there no questions asked. Tyler excelled at everything he did, gaming, water skiing, snowboarding, racing his car, you name it, he was an expert the first try. He was especially brilliant when it came to computers. He began building websites for his teachers in just the 5th grade. Intelligent doesn’t even begin to describe him. If you had a question, no matter how difficult, he had an answer. He was well spoken, wise, and bold. As a teenager, he was known as "Johnny", and ran wild with his best friend Alfred. They were inseparable and gave all of those around them many years’ worth of wonderful amazing memories to hold onto.

He was an amazing son, brother, grandson, cousin, and nephew, who was always willing to help, and never judged. He will be missed by all of those whose lives he blessed, and his soul will forever live on. His smile could light up the darkest room, and his humor was out of this world. He was the king of catch phrases, and silly faces and could make any one laugh. He had a unique talent of making you feel like the most important person in the world, if you were sad, he would do whatever it took to make you smile and laugh until you cried with joy. In his presence, you felt safe and comfortable. We will honor Tylers memory everyday by living just as he did. We will never judge those around us, we will always try to find the positive in the world, and we will love so deeply that it hurts.

Ty is survived by his parents, Shane and Christi Parkinson, his sister Shelby (Travis) Tarun of Las Vegas, Nevada, a brother Zachary Parkinson (Kayla Starling) of Gardner, Kansas, nephew Jameson Elliot Tarun, niece Alarah Fae Parkinson, and nephew Ronan Starling Anderson. He is also survived by his grandparents; Brent and Kathy Parkinson, Evelyn and Russ Johnson, and Thomas and Shiela Leger. As well as many aunts, uncles, and cousins, and friends who all love him and will miss him greatly. There will never be anyone like him to grace this earth, and his loved ones will cherish his memory forever.

Ty will lie in state at the Brennan-Mathena Funeral Home on Saturday, October 31, 2020 from 2:00 until 6:00 p.m. where his family will receive friends.  A Celebration of Life service will be held on his birthday, November 1, 2020.  Cremation will follow his visitation. In lieu of flowers, memorial contributions may be made in his memory by going to gofundme.com to Rest Easy Ty. Tyler Parkinson.

To order memorial trees or send flowers to the family in memory of Tyler Shane Parkinson, please visit our flower store.