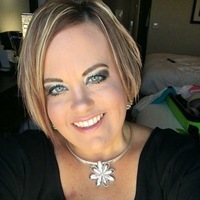 Sherry Lynn Collins, 43, of Topeka, passed away peacefully on October 23rd, 2020.  She was born on December 26th, 1976 in Topeka, Kansas the daughter of Helen (Frye) Knight who preceded her in death.  Sherry was a graduate of Silver Lake High School.  She was a lover of many crafts including scrapbooking, diamond painting and an avid collector of memories.

Sherry devoted her entire working career of 26 years to Dillons.  She started as a clerk and worked her way up from Scanning Manager to General Merchandise Manager.  In this role she thrived on breaking store records and was always up for a competition.  Most recently she was the trainer for the Click List Department and assisted other stores as they brought grocery pickup to their location.  She was a perfectionist, and this role was a perfect match for her.  She remained dedicated in her work and in her will to fight two cancer diagnoses.  She loved her co-workers and customers like family and brought positive energy to everything she did.  It was at Dillons that she met the love of her life.

She married Martin Collins on August 14th, 2010. He survives.  She is also survived by her daughter, Courtney Knight with husband Tanner, and three grandchildren, Braxton, Carter, and Kinzleigh Knight, along with many extended family and friends.

Sherry remained a brave, optimistic, and positive woman, even throughout her final days.  It would be wrong to say that Sherry lost her battle because she never stopped fighting.  She was always determined and stayed strong.  Through her, we know what resilience and perseverance truly look like.

Family and friends are invited to attend visiting hours on Tuesday, October 27th from 5:00-8:00 at Brennan-Mathena Funeral Home.  A private service will be held and will be available to view on the funeral home website later in the week.

Memorial contributions may be made in her memory to the Susan G. Komen Foundation and sent in care of Brennan-Mathena Funeral Home, 800 SW 6th Avenue, Topeka, Kansas 66603.

To order memorial trees or send flowers to the family in memory of Sherry L. Collins, please visit our flower store.