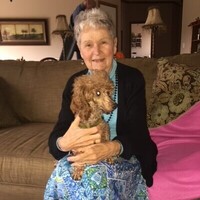 Mass of Christian Burial for Sharon Lee Hess, 85, Topeka, will be at 10 a.m. Tuesday at St. Matthew’s Catholic Church in Topeka. Burial will follow in Memorial Park Cemetery

She was born Sept. 7, 1936, in Atchison, Kansas, the daughter of John Fielder and Gertrude Cecelia (Wyatt) Haines.

She graduated from Mount St. Scholastica Academy in Atchison in 1954. She later attended secretarial school in Kansas City, Missouri, before she began working at Blish, Mize & Silliman Hardware in Atchison.

Bob’s job took them to Sand Springs, Oklahoma, in 1961. While they lived there, they adopted two children, Susan Marie in 1963 and Daniel Joseph in 1965. Sharon embraced motherhood and was always involved in her children’s activities and schooling. Girl Scouts, Boy Scouts, dance lessons and PTA gave way to being the world’s loudest cheerleader once the kids were old enough to play sports (and the kids weren’t even that good!). The Kansas Jayhawk basketball team later benefited from her unbridled enthusiasm for a winning team. Sharon and Bob held KU season tickets for several years, and she was often among the fans who met the team plane when it flew into Forbes Field. A photo of Sharon and her granddaughter greeting the team even made the cover of a KU basketball media guide.

The family moved to Topeka, near Lake Shawnee, in 1973. In 1976, Sharon began working for the Shawnee Heights school district. She worked at Tecumseh South Elementary School for 11 years, as a library aide and the school secretary, then moved to the Central Office in a secretarial position. She retired in 1998, after 22 years with the district.

Post-retirement, Sharon traveled a lot, overseas to Ireland, Italy and Vatican City; on the high seas as she and Bob cruised, at different times, in the Caribbean, through the Panama Canal, and up the West Coast of the U.S. to Alaska; and to many NCAA Final Four basketball tournaments and twice to the Maui Invitational when KU was playing.

She enjoyed cooking and sewing and passing those skills down to her daughter and granddaughter. She was always in her element when hosting a gathering, whether having friends over for cards or board games or a family reunion so large that she had to cook two turkeys. She was known for collecting photos and making thoughtful, detailed scrapbooks for family and friends, and she also enjoyed supporting Topeka Civic Theatre for many years.

She was preceded in death by her parents; a sister, Margaret Ann Haines; a brother, Terry Haines; and her son-in-law, Rob Roberts.

Lunch will be served at the church after services at the cemetery on Tuesday.

The family would like to thank the nurses and staff at Plaza West Healthcare and Rehab Center for caring for Sharon for the past three years.

To order memorial trees or send flowers to the family in memory of Sharon L. Hess, please visit our flower store.