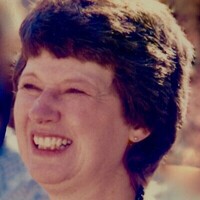 Rosemary was born in Topeka, Kansas on October 31, 1943, the daughter of Jacob and Ruby

(Alexander) Weiter. She was a 1961 graduate of Hayden High School. Soon after graduation,

was born the following June.

As a young woman, Rosemary worked as an assistant auditor at Sears, Roebuck & Company.

During her 30s, she started working in food service with the Topeka Public School District. She

when Beth was off from school. Rosemary worked for the school district until 2000 when she

became disabled after a car accident.

One of Rosemary’s favorite hobbies was playing cards. She played in a bridge club for years

and at least weekly played cards with her mother and mother-in-law. Rosemary and Bill would

often gather with friends to play cards on weekends. Another hobby that Rosemary greatly enjoyed was playing the slot machines at casinos.

Rosemary bowled with a league for a number of years. She was an avid reader of historical romance novels and enjoyed crossword

puzzles and other word games. Throughout her life, Rosemary appreciated music from many

genres including folk, celtic, rock and Americana. As a family, the Shoemakers went camping

every other weekend throughout the summers, often joined by friends and extended family.

Rosemary was a proud wife, mom, grandma and mother-in-law. She cared deeply for her

family, which she extended to her daughter’s friends as well as the Haines family. Rosemary

Rosemary, and many described her as an ‘“angel on Earth.” Rosemary’s generous spirit moved

her to contribute to many charities and social services.

Rosemary is survived by her husband, Bill, her daughter, Beth (Bill) Haines of Kansas City,

Missouri, and their daughter, Abbey Haines. She is also survived by her 3 siblings: George

Louis, MO as well as her sister-in-law, Mary Livingston of Kansas City, MO.

company of her parents, her cherished dog Vicky, and her son William Eric, whom she never

had the chance to know here on Earth.

Due to the Covid-19 pandemic, a private Memorial Mass of Christian Burial will be held at Mater

Funeral Home website by Monday, February 22. A Celebration of Life event will be planned

for later in the year at which time she will be inurned in Mt. Calvary Cemetery.

To order memorial trees or send flowers to the family in memory of Rosemary A. Shoemaker, please visit our flower store.