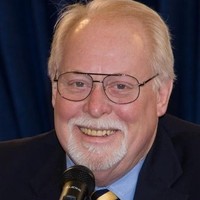 Robert A. Murray, 68, of Topeka passed away on March 1, 2020 at the University of Kansas Medical Center, St. Francis Campus.

He was born in Junction City, Kansas on October 27, 1951 the son of Gerald H. and Rose (Allender) Murray.

Bob was a television news anchor and political staffer. He worked for WIBW in Topeka, as well as stations in Lincoln and Omaha, Nebraska. He worked several political campaigns including presidential campaigns for Dan Quayle, Steve Forbes and John McCain, along with senate and gubernatorial campaigns for Sam Brownback and many more.

He enjoyed fishing, golfing and the culinary arts. He was a member of the Republican Party.

Bob gave of himself to benefit others through the Midwest Transplant Network. He was cremated.

A Memorial visitation will be held on Sunday, March 15, 2020 from 2:00 until 4:00 p.m. at the Brennan-Mathena Funeral Home. A Celebration of Life service will follow at 4:00 p.m. Inurnment will take place at a later date.

Memorial contributions may be made in his memory to the Kansas Law Enforcement Memorial Foundation; SCARS or to a charity of the donor’s choice and sent in care of Brennan-Mathena Funeral Home, 800 SW 6th Ave., Topeka, Kansas 66603.

To order memorial trees or send flowers to the family in memory of Robert A. Murray, please visit our flower store.