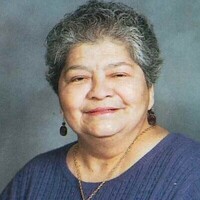 do? Anyone who knew her well knew her loyalties and passions –

After surviving many health battles, including a debilitating stroke,

remaining children, two of her grandchildren, and a son-in-law at her

that Pauline must have been well loved. She was.

Apolonio and Florentina Palacio. She brought the heat for the next 85

She and her brother, Bernard, grew up in a stop on the road named

Bazaar in Chase County, Kansas. Her mother tended a garden and

chickens and her father worked on the Santa Fe railroad and

concocted home brew in the cellar.

from the high school in Chase County in 1954.

She graduated from Newman Hospital School of Nursing in Emporia,

Kansas, becoming a registered nurse in the days when they wore

starched white caps and uniforms. She worked her entire career in

The girl from the country married a jazz musician from the city. She

was a better way to support a family.

Topeka, the parish where they raised their children.

Like her own mother, Pauline was an old-school mom. She insisted

the tinsel be placed on the Christmas tree. One. Strand. At. A. Time.

Many memories of Pauline revolve around food. She was the master

of the 1960s table, serving salads of iceberg lettuce topped with

cottage cheese and sliced cling peaches from a can. She put Miracle

Whip on her tostados.

To this day, her children swear no one could make a better chocolate

She was a fun mom who introduced her children to music (country),

theater (Starlight) and movies (drive-ins). She loved glamour, from

The plastic bag industry has been dealt a blow. Pauline would fill bags

with paper products, groceries and coupons and pass them out to her

children – even when they were adults.

The neighbor kids called her mom, which made some of her own kids

jealous. But they later came to understand what a compliment that

She was a helper who modeled service to others. She volunteered

many years at Sacred Heart’s annual Junefest/Germanfest. She

belonged to the women’s auxiliary of the local letter carriers

She wasn’t afraid to share her political views. She was a fierce and

loyal Democrat who volunteered for many campaigns, including

Long before The Weather Channel, she was the family meteorologist.

Pauline was not given a middle name at birth, but her children know

her middle name was “Family.”

She was preceded in death by her husband of 40 years, daughter Lydia

Missing her are her children Lisa Houser of Overland Park; Lori Wickliffe

and her husband, Kevin, of Lawrence; Anthony Gutierrez and his wife,

wife, Agatha, of Overland Park; stepdaughter Deborah Hunter and her

husband, Jeff, and a daughter from another mother, Lisa Sandmeyer, of

Pauline also is survived by 16 grandchildren and a passel of

Mass of Christian Burial will be celebrated on Wednesday, December 15th at 11:00 a.m. at Sacred Heart Catholic Church.  Private interment will be at Mount Calvary Cemetery.

Memorial contributions can be made to the Augustinian Recollect

To order memorial trees or send flowers to the family in memory of Pauline Gutierrez, please visit our flower store.