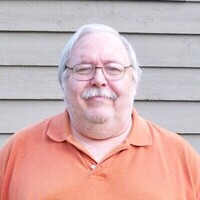 He was born April 5, 1952 in Hutchinson, KS the son of Leonard and Louise (Wells) Weber.

Paul worked at Duncan Movie Magic in Topeka for over 20 years.  He is survived two sons, Christopher Weber and his wife Bethany of Topeka, Lucas Weber of New York, NY, along with two brothers, Michael Weber of CO and Richard Johnson of TX.  Two grandchildren, Nicholas and Rachel Weber also survive.  He was preceded in death by his parents, Leonard and Louise and a brother, Robert Johnson.

Paul has been cremated.  Burial of his urn will be at a later date.

To order memorial trees or send flowers to the family in memory of Paul L. Weber, please visit our flower store.