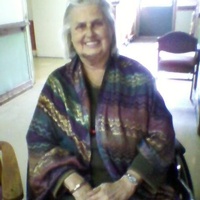 She was born in Brooklyn, New York on November 3, 1934 the daughter of Wilfred and Francis (Cook) Tussel.   Norma was a 1953 graduate of Topeka High School.

Norma enjoyed drawing and sewing.  She was also involved with the Red Hat Society at Providence Living Center.

She married Leland Broxterman and they later divorced.  She is survived by her children, Christine M. Austin of Topeka, Cynthia A. Miller of Valley Falls, and Michael L. (Kathy) Broxterman of Ozawkie, 11 grandchildren, 13 great grandchildren, a sister Patricia Mason of Michigan and a brother Donald Tussel of New Jersey.  Norma was preceded in death by a son Stephen V. Broxterman in 2016 and by a brother Robert DelZeit in 2009.

Memorial contributions may be made to Midland Hospice Care and sent in care of Brennan-Mathena Funeral Home, 800 SW 6th Ave., Topeka, Kansas 66603.

To order memorial trees or send flowers to the family in memory of Norma Diane Broxterman, please visit our flower store.