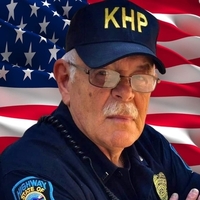 Retired MCI Lieutenant Michael D. Marnach, Sr., age 71, of Topeka, KS, passed away with his beloved family by his side on Thursday, March 17, 2022, at the University of Kansas Health System-St. Francis Campus.

Mike was born the son of Elmer and Patricia (Reynolds) Marnach on June 24, 1950, in Emmetsburg, Iowa.

Mike enlisted in the United States Marines in January of 1968, during the Vietnam War. While serving in Vietnam, he received numerous accolades for his service. Mike was honorably discharged from the Marines in April of 1972, achieving the rank of Corporal. Upon his return from service, Mike joined the Kansas Army National Guard in 1972, retiring as First Sergeant in 2002. He then served as Sergeant of Arms for the Vietnam Veterans of America-Kansas State Council. Mike was proud of his service to his country, and he was always willing to lend a hand for his fellow Vietnam and service comrades.

It was in 1972, Mike started his career with law enforcement. He served in different police departments throughout the State of Kansas. In 1985, he started his final career with the Kansas Highway Patrol, moving up the ranks as a Motor Carrier Inspector. On September 8, 2020, Mike retired as MCI Lieutenant from the Kansas Highway Patrol after serving 35 years with the State of Kansas. He will be known for his hard work, dedication, and willingness to serve.

In his spare time, Mike enjoyed fishing, hunting, camping, working, and socializing. He liked to watch K-State sports and the Kansas City Royals. Spending time with his family, especially his grandchildren, brought him the greatest joy.

He was preceded in death by his parents; grandson, Kristopher DeForest, Jr., and two brothers, George and Richard.

To order memorial trees or send flowers to the family in memory of Michael Marnach, please visit our flower store.