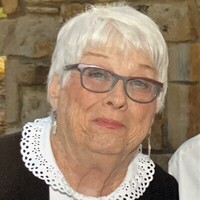 Mary C. Atkinson, 82, of Lawrence, passed away on October 5, 2021 at the Lawrence Memorial Hospital.

She was born in Topeka, Kansas on February 17, 1939 the daughter of Fred and Bernadette (Cunningham) Whitlock.  She grew up in Tecumseh and attended school there until 8th grade and played many sports while there.  Mary was a 1957 graduate of Highland Park High School.

Mary was employed by Southwestern Bell Telephone for five years, then as a Receptionist/Office Manager for Dr. Jerry Leroux DVM for five years and retired in 1999 from the office of Dr. B.D. Kunc DC.

She was a member of the Mustard Seed Church for 20 years where she served as Deaconess, Financial Ministry, and KCCI Ministry.  In 1995 she and her husband Ray won the Volunteer of the Year award for KCCI.  Mary also worked at the Link Kitchen and Meals on Wheels. She was currently a member of Connect Church in Lawrence.  Her greatest enjoyment was spending time with her children and grandchildren, friends and girlfriends.  She loved traveling with her husband Ray and her favorite trip was going to Ireland.  Mary also loved gospel and country music and her favorite artist was Elvis Presley.  She was also an avid KU Basketball and KC Royals fan.

She married Allan Smith in Topeka on July 18, 1959.  They divorced in 1972.  Mary married Raymond R. Atkinson on May 27, 1977 in Lawrence, Kansas.  He survives.  She is also survived by two daughters, Katherine E. Smith and Susan E. (Jay) Allen of Wichita, a step-son, Tim (Jennifer) Atkinson of Ft. Worth, TX, five grandchildren, Ryan (Jennifer) Smith, Connor and Haley Allen, and Clayton and Levi Atkinson, and three great grandchildren, Cooper and Lane Smith and Riley Atkinson.  Mary is also survived by her cat, Sophie.   She was preceded in death by her parents, her brother Jerry Whitlock and his wife Roberta, and a step-son, Daniel R. Atkinson..

Mary will lie in state at the Connect Church in Lawrence from 9:00 to 10:00 a.m. where her family will receive friends. Graveside services will follow at the Oak Hill Cemetery, Lawrence, Kansas at 10:30 on Monday.

Memorial contributions may be made in her memory to the Connect Church of Lawrence or the Lawrence Humane Shelter and sent in care of Brennan-Mathena Funeral Home, 800 SW 6th Ave., Topeka, Kansas 66603.

To order memorial trees or send flowers to the family in memory of Mary C. Atkinson, please visit our flower store.