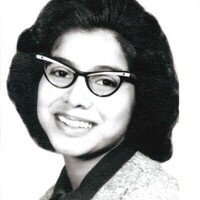 Lillian “Irene” Zarazua Flores of Topeka, KS, 78, went to eternal rest on Wednesday, June 9, 2021 at her home surrounded by her loving family.

Irene was born in a boxcar in Pauline, KS on March 31, 1943 the daughter of Jose and Esther Zarazua.  She had the privilege of growing up in Pauline until her family moved to Topeka where she resided in the Bottoms.  She was a graduate of Topeka High School and attended Washburn University.

Irene grew up with seven brothers and two sisters, a family she always stayed close to for life.  She learned to cook at a very early age, a tradition she passed on to her son, daughters and granddaughters.  She loved to cook and share family time watching KU Basketball and Dallas Cowboys football.  Irene also enjoyed going to the casino and bingo at times.  She loved music and was a dancer for the “Belles of 33”.

Irene was a member of Our Lady of Guadalupe Church where she served as a Eucharistic Minister,taught CCD classes at the church, and volunteered for the Fiesta Mexicana..

Irene worked at the legendary Jayhawk Towers as an elevator attendant, which she truly enjoyed in her early years.  She also worked at Seymour Foods and St. Francis and Stormont-Vail hospitals before she became a stay-at-home mom to raise her family.  Irene will be most remembered as a nurturing caregiver for anyone who came to her home.

Irene is survived by her twelve children, twenty-nine grandchildren and twelve great grandchildren. She was preceded in death by a grandson, Salathiel De Russe and a great granddaughter, Emma Irene Plankinton.

Irene will lie in state at the Brennan-Mathena Funeral Home on Sunday, June 13th from 2:00 until 7:00 p.m. where a Legion of Mary Rosary will be prayed at 5:00 p.m.  Mass of Christian Burial will be celebrated on Monday, June 14th at 10:00 a.m. at Our Lady of Guadalupe Catholic Church.  Interment will follow in Mt. Calvary Cemetery.

Memorial contributions may be made in her memory to St. Jude’s Children’s Hospital, sent in care of Brennan-Mathena Funeral Home, 800 SW 6th Ave., Topeka, Kansas  66603.

To order memorial trees or send flowers to the family in memory of Lillian "Irene" Zarazua Flores, please visit our flower store.