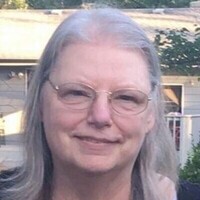 She was born the daughter of Joseph, Jr. and Teresa (Burke) Zimmerman.  Kathy was raised by Joseph Jr. and his second wife, Tina Zimmerman.  They all have preceded her in death.

She graduated from Highland Park High School. Her son Troy, told the story of her working for Mahatma Gandhi's great-great grandson as a scrub tech at Saint Francis Hospital, Topeka, and later she was transferred to Grand Junction Colorado with a private heart transplant team.  She was a scrub tech with the same doctor for the first-ever heart transplant done on the western side of the Rocky Mountains. Kathy later worked as a Phlebotomist at the Community Blood Center, Topeka, for over 20 years.

Per Kathy’s wishes cremation has taken place and no service have been scheduled.

In lieu of flowers the family suggests memorial donations be made in Kathy’s memory to the Community Blood Center sent in care of Brennan-Mathana Funeral Home, 800 SW 6th Avenue, Topeka, KS 66603.

To order memorial trees or send flowers to the family in memory of Katherine Marie Zimmerman Stahlin, please visit our flower store.