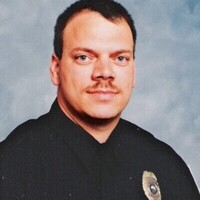 He was born April 27, 1970 in Merriam, KS the son of Robert and Pamela (Campbell) Dillenbeck, II.

Karl served in the US Navy prior to becoming a Police Officer in Mission, KS.  He was member of OH-STOC motorcycle club.

Cremation has taken place. Due to an interruption in some of the family’s travel plans, the memorial visitation has been rescheduled.  It now will be held from 5:00 until 8:00 p.m. Friday, October 30, 2020 at Brennan-Mathena Funeral Home.  Private burial of his urn will take place at Rochester Cemetery.

To order memorial trees or send flowers to the family in memory of Karl T. Dillenbeck, please visit our flower store.