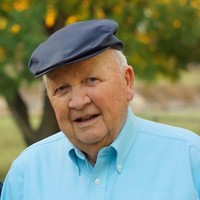 Joe graduated from Holy Name Grade School in 1943 and from Capital Catholic (Hayden High School) in 1947.

He was drafted into the U.S. Army in 1953 and attained the rank of Staff Sergeant. Joe was deployed to Europe to the Czech border during the Cold War. After serving his time, he was employed by the McFarland Warehouse until he moved to the Santa Fe Shops and eventually to the Santa Fe office building where he was a computer systems operator.  He retired in 1991.

He and Rita were strong advocates for Catholic Education and were very active at Holy Name Catholic Church (now Mater Dei Parish).  Between the two of them, they served on the Finance, Parish, and School Councils, chaired the paper drives, school carnivals and especially the dinner for the parish bazaars along with numerous friends.  They were also awarded the Parish Volunteer Award.

Joe took his food very seriously. He loved to eat and no matter what…no one should leave hungry.   He always said, “If you go away hungry it’s your own damn fault!”

There wasn’t anything he couldn’t do, whether it was building a double car garage with his dad or a 2-story addition to the family home.  After the tornado of 1966, he helped numerous people with painting and small construction needs.

Their volunteer work continued at Hayden High School where they served on the PACE (Parents & Alumni for Catholic Education) Board, Hey Day Carnival and ran the football concessions.  They were also very involved with the PACE Auction.  For their hard work, they received the Sisters of Charity Volunteer Award in 1991.

Visitation will be Friday, March 6, 2020 from 4 pm to 9 pm at the Mater Dei Holy Name Catholic Church where a Parish Rosary will be prayed at 7:00 p.m.   Mass of Christian Burial will be 10:00 am Saturday, March 7, 2020 at the church.  Burial will follow at Mt. Calvary Catholic Cemetery.

To order memorial trees or send flowers to the family in memory of Joseph T. McCaffrey, please visit our flower store.