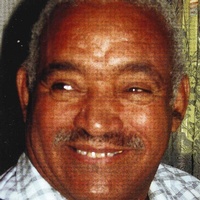 Johnny Joe Fisher, 81, of Topeka, passed away on March 7, 2019 at his home surrounded by his family.

He was born in Kansas City, Missouri on February 2, 1938 the son of Evelyn Hysten Fisher.

He owned Fisher Trucking where he operated Dump Trucks.  Johnny Joe was also a mechanic and helped on the family farm in his youth.

He was loved and will be remembered for all the ways he helped others.  He and his wife helped raise his extended family as his own.

Johnny Joe enjoyed going to the Black Shrine Dances and helped to form a Motorcycle Club where he enjoyed traveling trips with his motorcycle buddies.

He married Carla Young in Topeka, Kansas on July 15, 2013.  She survives of the home.  He is also survived by his children, Johnnie-Neal (Winfred) Rodriguez of Topeka, Michele (David) Dent of Mableton, Georgia, Johnny (Hella) Fisher Jr. of Denmark, and Carol Scroggins of Kansas City, 10 grandchildren, 14 great grandchildren, and 4 great great grandchildren, two sisters, Carol Drummond and Louise Davis, and two lifelong friends, Ernest Ross and Daryll Hysten.  He was predeceased by his mom, Evelyn and a son, Danny Fisher.

As per his wishes he was cremated.  The family will receive friends on Monday, March 18th from 1-3 P.M. at the Brennan-Mathena Funeral Home.  A Memorial Service will follow at 3:00 p.m.  Military honors will be conducted by the Army Funeral Detail and American Legion Post #421.

Memorial contributions may be made in his memory to Midland Hospice Care and sent in care of Brennan-Mathena Funeral Home, 800 SW 6th Ave., Topeka, Kansas 66603.

To order memorial trees or send flowers to the family in memory of Johnny Joe Fisher, please visit our flower store.