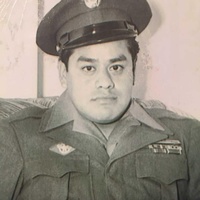 John C. Ramirez, 98, of Topeka, passed away peacefully on December 27, 2018. He was born on June 12,1920 in Sileo, Gto, Mexico, the son of Froylan and Evarista Corona Ramirez. John was a proud American Veteran of the United States Army, where he served during World War II in the Pacific, New Guinea, Philippines, and Hiroshima. He received two Bronze Star Medals and two Purple Hearts. He worked at the Santa Fe Railway and Morrell Meat Packing Plant as a butcher. He was always a hard worker. He enjoyed playing pool and helping others. He was a member of Our Lady of Guadalupe Church. John married Conception “Connie” Torrez on February 14, 1942 at Our Lady of Guadalupe Church. She preceded him in death on February 7, 1985. John married Amelia “Molly” Tinoco at Our Lady of Guadalupe Church. She preceded him in death on October 22, 1997. He was preceded in death by his brothers Theodore, Cecil, sister Antonia R. Montejano, and a very loving step daughter “Evie” Ramos. He is survived by his children, Louis H. Ramirez of Aurora, IL and Teresa Ramirez of Topeka, KS; three grandchildren, nine great grandchildren, two great great grandsons and numerous nieces and nephews. Also, a very special ‘thank you’ to his nephew Gilbert Ramirez.

Mass of Christian Burial will be Friday, January 4, 2019 at Our Lady of Guadalupe at 10:00 a.m. Interment will follow at Mount Calvary Cemetery with military honors conducted by the Vietnam Veterans.

Memorial contributions may be made to Our Lady of Guadalupe Church and sent in care of Brennan Mathena Funeral Home. 800 SW 6th Ave, Topeka, KS, 66603.

To order memorial trees or send flowers to the family in memory of John C. Ramirez, please visit our flower store.