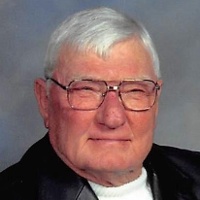 John R. “Dick” Toelkes, 89, of Tecumseh, Kansas died Sunday, June 2, 2019 at Aldersgate Village Home Plus. He was born on September 7, 1929 in Hays, Kansas the son of Fred P. and Agnes (McNulty) Toelkes. He was a graduate of Highland Park High School. Dick worked at Goodyear Tire and Rubber Company for 43 years, retiring in 1993. He was a member of Sacred Heart Catholic Church and his faith was a very important part of his life. Dick enjoyed spending time with his family, traveling, gardening, riding his ATV and was an avid NASCAR, KC Chiefs and KU Jayhawk fan. Dick was married to Yvonna Bradford. They had five children and were later divorced. He then married Neva J. (McIntosh) on April 10, 1972 in Rossville, Kansas. With the addition of her children the number grew to ten. She predeceased him on March 16, 2001. He was also preceded in death by his parents, and a brother, Philip Toelkes. Survivors include his children, Jean House, Greg (Billie) Toelkes, Linda (Roger) Harmon, Mark Toelkes (Sherry Lorence), Shirley Anderson, Janelle (Don) Liska, Dan Toelkes, Eddy (Chris) Anderson, Bret (Michelle) Toelkes, and Nora (Fred) Remington; three brothers, Bill (Nadia) Toelkes, Roger Toelkes (Jane Cafer), and Mike (Donna) Toelkes, 17 grandchildren, 23 great grandchildren, and 6 great-great grandchildren. Dick will lie in state at the Brennan-Mathena Funeral Home on Thursday from 2-8 p.m. where the family will receive friends from 5:00 to 8:00 p.m. and a Parish Rosary will be prayed at 5:30 p.m. Mass of Christian Burial will be celebrated at Sacred Heart Catholic Church at 2:00 p.m. on Friday, June 7th. Interment will follow in Mt. Calvary Cemetery. In lieu of flowers, memorial contributions may be made to Sacred Heart Catholic Church and sent in care of Brennan-Mathena Funeral Home, 800 SW 6th Ave., Topeka, Kansas 66603. Online condolences and fond memories may be left at www.brennanmathenafh.com
To order memorial trees or send flowers to the family in memory of John R. "Dick" Toelkes, please visit our flower store.