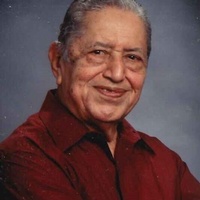 He was born in Topeka, Kansas on March 24, 1924 the son of Jose Joaquin and Paula (Luna) Padilla.  He  attended Capitol Catholic High School.

John served in the U.S. Army during World War II.  He retired from Santa Fe Railway Company as a Freight Carman after 38 years of service.  He was a member of the American Legion Capitol Post #1.  John was so fortunate to be selected as a part of a group of veterans to be included in an honor flight to Washington DC on October 30, 2013 which recognized their service during World War II.

John will lie in state at Our Lady of Guadalupe on Wednesday, February 6th from 4:00 until 7:00 p.m. where rosaries will be prayed by the Parish at 5:30 p.m. and by the Juan Diego Knights of Columbus at 6:00 p.m. followed by the Chalice Ceremony.  Mass of Christian Burial will be celebrated on Thursday at 10:00 a.m. at Our Lady of Guadalupe.  Interment will follow in Mt. Calvary Cemetery where military honors will be provided by the Kansas Army National Guard and American Legion Post #421.

Memorial contributions may be made in his memory to Our Lady of Guadalupe Church, or the House at Midland Care, and sent in care of Brennan-Mathena Funeral Home, 800 SW 6th Ave., Topeka, Kansas 66603.

To order memorial trees or send flowers to the family in memory of John Luna Padilla, please visit our flower store.