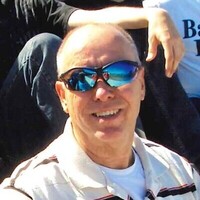 He was born in Yonkers, New York on February 7, 1946 the son of John and Florence (Schultz) Koerner.

John was retired as a Journeyman Electrician for the Kansas Power and Light Company.  He was a member of the Electrical Workers Union.  He was one of the startup electricians for the Jeffrey Energy Center in St. Marys.

He enjoyed working on his farm with his John Deere tractor and tinkering with anything that had a motor and wheels.  John was an avid NASCAR fan.  He will be most remembered as a family man who enjoyed a special relationship with his granddaughter Moray.

John married Patricia C. McNeive in Topeka, Kansas on February 22, 1969.  She survives.  He is also survived by his three children, Ann-Marie Colleen Koerner, John Harold Koerner, and Kristy Leigh Koerner, and granddaughter, Moray O. Estes all of Kansas City. KS.  He was preceded in death by a son-in-law, Michael A. Estes, a brother and sister-in-law, Bobby and Kay Koerner, and his parents.  He is also survived by many brothers-in-law, sisters-in-law, nieces, nephews and a host of friends.

John will lie in state at the Brennan-Mathena Funeral Home on Tuesday, October 13th where his family will receive friends from 4-8 p.m. and a Parish Rosary will be prayed at 7:30 p.m.  Mass of Christian Burial will be celebrated on Wednesday, October 14th at 11:00 a.m. at Mater Dei Assumption Catholic Church.  Interment with military honors will follow in Rochester Cemetery.

Memorial contributions may be made in his memory to Children’s Mercy Hospital in Kansas City and sent in care of Brennan-Mathena Funeral Home, 800 SW 6th Ave., Topeka, Kansas 66603.

To order memorial trees or send flowers to the family in memory of John James Koerner, please visit our flower store.