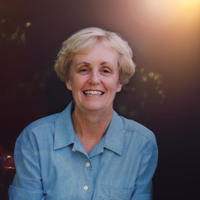 Joan attended Sterling College, Sterling, Kansas, and graduated with a bachelor’s degree in elementary education. She taught school in Chandler, Arizona, and later in Kansas schools. She married the Reverend Charles J. Carson in 1960. They were married for 55 years.  Joan is preceded in death by her husband. She is survived by three children – Cathy (Mark) Layng of Paxton, Illinois; Marlis Carson of Washington, D.C.; and Kenneth Carson of Bend, Oregon; seven grandchildren; and two great-grandchildren.

Joan’s Christian faith played a large role in her life, blessing others with her care and friendship. She served the church alongside her husband and was an elder in the Presbyterian Church. She was an avid choir member and directed the children’s choir. She was also a Girl Scout troop leader for many years. Joan loved hiking, especially in the Rocky Mountains, and her lifetime enjoyment of reading encouraged not only her children and grandchildren but also countless elementary and middle school students. Joan will also be remembered for her quick wit and her ability to make new friends.

A memorial service will be held at a later date.

To order memorial trees or send flowers to the family in memory of Joan E. (Anderson) Carson, please visit our flower store.