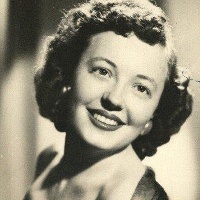 Janice C. Gutzwiller, 93, of Topeka, Kansas, passed away on July 26, 2019 at her home. Janice was born on October 3, 1925 in Topeka. Daughter of Michael and Agnes Assenmacher Connolly. Janice was educated in the Topeka Catholic School System where she graduated from Assumption Grade School in 1939, then graduated from Capital Catholic High School (now known as Hayden) in 1943. In October of 1943 at the peak of World War II, she found her first job at a supply depot in Pauline, Kansas where she worked for over eight years. She was a Messenger, Type Setter, Stock Record Clerk, Inventory Clerk, and Warehouseman. Janice completed the United States Air Force Basic Training at Kelly Field and Lackland Air Force base in San Antonio, Texas in March of 1952. She served her country proudly when she enlisted in the United States Air Force during the Korean Conflict. After basic training she was sent to the Presidio of San Francisco to Cook and Baker School in hopes to become a Dietician or Nutritionist one day. After graduating as the Honor Student of her class, Janice was sent to Griffiss Air Force Base in Rome, New York for the rest of her three-year enlistment. In her off time, she loved to sing with many bands in the Rome and Utica area. Following her discharge, Janice remained in Rome, New York and worked as a Statistical Clerk at the base and continued her singing. In 1959 Janice returned to Topeka. She was unable to find suitable employment, so she re-enlisted in the United States Air Force and was assigned to the Orlando Air Force Base, Florida Hospital Dinning Hall, where she learned a lot about special diets. She also kept up her passion for singing. She entered many talent shows and programs. On June 3, 1961 Janice married Joseph Gutzwiller, also an Airman, in Orlando, Florida. Shortly after, they were expecting their first child, so Janice had to leave the service due to the rules of females having minor children. Her husband was transferred in December to San Antonio, Texas. Janice and her family returned to Kansas in December of 1967, just in time for Christmas. Janice then worked for what would be her favorite job yet, a secretary at Hayden High School, her old Alma Mater. In 1981 she decided to try the Federal System again and spent a year at the VA Hospital. Janice treasured all the travel that she was lucky enough to do throughout her life. Her favorite places were Ireland and Italy. In her spare time, she would move people with her love of words. She was quite the poet and storyteller. She had an amazing life that she just couldn’t wait to share with everyone. She was a member of Assumption Catholic Church and The Daughters of Isabella. Janice is proceeded in death by both of her parents, and her two sisters, Mary Eilleen Hollenbach and Margaret “Marge” Ann Miller. She is survived by her son James Michael Gutzwiller and daughter, Karen Eilleen Gutzwiller and two grandchildren, Candace Marie (Kyle) Kersting and Sean Michael Gutzwiller. Visitation will be Tuesday, July 30, 2019 at Brennan-Mathena Funeral Home from 5:00 pm – 7:00 pm with a rosary at 6:00 pm. Memorial Mass will be July 31, 2019 at Assumption Catholic Church at 10:00 am. Private family inurnment will be at a later date. Memorial contributions may be made to Midland Hospice Care. To share a memory or to leave condolences, please visit Janice's memorial webpage at www.brennanmathenafh.com Arrangements have been entrusted to Brennan-Mathena Funeral Home, 800 SW 6th Ave., Topeka, KS 66603.
To order memorial trees or send flowers to the family in memory of Janice C. Gutzwiller, please visit our flower store.