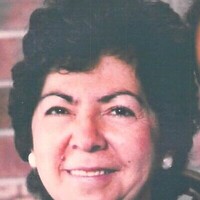 She was born January 15, 1931 in Libertyville, IL the daughter of Santiago and Delphina (Romero) Ramos.

For many years Irene worked in the cafeteria for USD #501 and later in the deli at K-Mart.

She was a member of Our Lady of Guadalupe Catholic Church.  Irene was a great cook being well known for expertise in making tortillas and in her younger years enjoyed playing sports with her sons.

Irene will lie in state after 2:00 p.m. Wednesday at Brennan-Mathena Funeral Home.  The family will receive family and friends beginning at 4:00 p.m. The Legion of Mary will pray the rosary at 6:30 p.m.  Mass of Christian Burial will be celebrated at 10:00 a.m. Thursday at Our Lady of Guadalupe Catholic Church.  Due to the large number of family members and limited seating at the church, the family has asked for those that wish to attend to consider attending the burial rather than the mass.  The anticipated time for the graveside committal service to begin is 11:15 a.m. at Mount Calvary Cemetery.

In lieu of flowers contributions can be made to Our Lady of Guadalupe Catholic Church or Midland Care Hospice sent in care of Brennan-Mathena Funeral Home, 800 SW 6th Avenue, Topeka, KS 66603.

To order memorial trees or send flowers to the family in memory of Irene R. "Renie" Escobar, please visit our flower store.