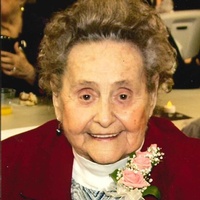 She was born in Topeka, Kansas on March 7, 1923 the daughter of Harry J. and Elizabeth A. (Porubsky) Devlin.

Hazel was a homemaker and will be remembered for always putting her faith, family, and friends first in her life.

She was a lifelong member of St. Joseph Catholic Church, where she was in charge of the kitchen for funeral dinners and was also known for her bierocks and homemade noodles.  During the Annual Church Social, she was in charge of the kitchen and started the Pick Pocket Activity which became a tradition.  Hazel was a member of the Parish Council, Altar Society, St. Anthony’s Guild and counted the Sunday offeratory collection at her church.  She was a Precinct Committee Person of Ward 1, active on the Democratic Central Committee and served over 50 years on the Election Board.  She was a member of the Hayden Mother’s Club, cooked in the Kitchen at Hayden East in the 1950’s and she and her husband were great supporters of Hayden Sports working in their concession stand during games.  Hazel was also a member of Pappan’s Landing Sr. Center Board, member and past president of the American Historical Society of German’s from Russia, member and Past President of the Let’s Help Board of Directors, and American Legion Post #400 Women’s Auxiliary.

Hazel will lie in state at St. Joseph Catholic Church on Friday from 2:00 until 8:00 p.m. where rosaries will be prayed by the Altar Society at 4:00 p.m. and by the Parish at 5:30 p.m.  Mass of Christian Burial will be celebrated on Saturday, February 2nd, at 10:00 a.m. at St. Joseph Catholic Church.  Interment will follow in Mt. Calvary Cemetery.

In lieu of flowers, memorial contributions may be made in her memory to St. Joseph Renovation Fund, Hayden High School Athletics Department or Sr. Corita’s Sandwich Ministry and sent in care of Brennan-Mathena Funeral Home, 800 SW 6th Ave., Topeka, Kansas  66603.

To order memorial trees or send flowers to the family in memory of Hazel Marie Barnes, please visit our flower store.