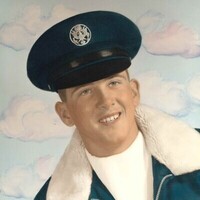 He was born October 6, 1947 in Frankfort, Kentucky, the son of Sylvan and Corine (Meriwether) Gilbert.  He graduated from Shelbyville High School in 1966.  After high school Glenn served in the United States Airforce during the Vietnam War.

He worked for the United States Postal Service as a letter carrier for over 25 years.

Mr. Gilbert enjoyed hunting, traveling, gardening, taking fishing trips to Alaska, Hawaii, and the Caribbean.  He was a sports fan, supporting Kansas University, the Kansas City Chiefs, and was a Kentucky Wildcat by heart.  He was the biggest sports fan of his loving grandchildren.

Glenn and Mary (Blanco) exchanged wedding vows on August 9, 1969 at St. Matthew Catholic Church in Topeka, Kansas.  She survives of the home.

Mr. Gilbert was preceded in death by his parents, and brothers, Edward Gilbert and Wayne Gilbert.

The family will receive friends on Thursday, July 7, 2022 from 9:00am to 9:30am at Brennan-Mathena Funeral Home, where a rosary will be prayed at 9:30am followed by a funeral service at 10:00am.  Entombment with military honors will immediately follow at Mt. Calvary Cemetery.

To order memorial trees or send flowers to the family in memory of Glenn Allen Gilbert, please visit our flower store.