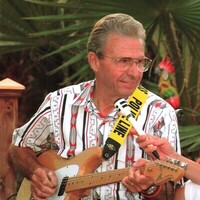 Gene worked for the U.S. Postal Service for 33 years and retired in 1985 where he was the Postmaster of Chapman, Kansas for ten years.

He loved his family, the outdoors and tinkering in his garage. His family was always his highest priority and he looked forward to their annual two week vacation.  Most weekends were spent, camping, fishing and water skiing at various lakes.  For many years he farmed and had horses and Longhorn cattle.  Gene played the guitar in various bands and in his band called the Country Tyme Band.  He also volunteered at Nursing Homes throughout Topeka where he played his guitar for over fifty years.

Gene married Addeene E. Schlick in Westphalia, Kansas on June 26, 1952.  She survives.  He is also survived by his daughter Diane Davis and her husband Jim Trainor of Meriden, a brother John Davis of Sparta, Michigan, sister-in-law, Marjorie Rohr of Burlington, brothers-in-law William Schlick of Topeka and Glen (Maria) Schlick of Ocean City, Maryland, as well as many cousins, nieces and nephews.

He was preceded in death by two sons, Ronnie Gene Davis in infancy in 1953 and Mike Davis in 2018, and a sister-in-law Jodi Davis.

The family specifically requests that in lieu of flowers memorial contributions may be made in his memory to Sacred Heart Catholic Church or Interim Hospice and sent in care of Brennan-Mathena Funeral Home, 800 SW 6th Ave., Topeka, Kansas 66603.

To order memorial trees or send flowers to the family in memory of Gene E. Davis, please visit our flower store.