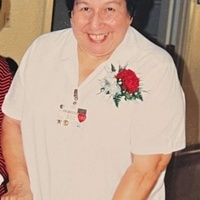 She was born March 2, 1938, in Mayetta, the daughter of James Wamego Sr. and Edith (Thompson) Wamego.  Dorothy attended the Marty Indian School in Marty South Dakota.

She worked as a housekeeper for the United Methodist Home and Aldersgate Village for 15 years.

Dorothy was a member of the Prairie Band Potawatomi Nation.  She enjoyed going to pow wows, collecting bears, going to garage sales, and being outdoors.

She married Bernard Eugene VanDeWiele in St. Mary’s Kansas.  He preceded her in death.

She was preceded in death by her parents; husband; son, Bernie VanDeWiele; and brothers; Algernon Wamego and James Wamego Jr.

Cremation is planned and private family services will be held at a later date.

To order memorial trees or send flowers to the family in memory of Dorothy Darline VanDeWiele, please visit our flower store.