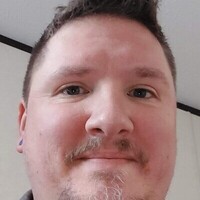 Christopher Allen Thompson, 38, of Topeka, passed away on April 8, 2022, at the KU Medical Center in Kansas City.

He was born in Colby, Kansas on August 2, 1983, the son of Robert Leon and Marilyn Jo (Foerschler) Thompson.  Chris was a graduate of Iola High School and studied at Benedictine College.

He served his country in the U.S. Army from 2004 to 2007 as a cook.  He was with the Army National Guard prior to his enlistment.

Chris was a member of Boy Scouts Troop #26 and loved camping and all outdoor activities.  He was a cook for Camp Tekakwitha through the Archdiocese.

Chris also worked as a cook and in general contracting after his discharge from the military.

He was a food connoisseur and loved cooking, baking and grilling, and also loved watching movies. Chris enjoyed listening to all types of music. He was a Royal’s Baseball and Chief’s Football fan.  He will be most remembered for his great sense of humor and his love of people.

Chris was preceded in death by his mother, Marilyn Revell on November 16, 2019.  He is survived by his father and step-mother Robert and Janet Thompson, his step-father Walter Revell, his brother Aaron Thompson, his sister, Megan Godfrey and her husband Galen, and his step-siblings, Justin (Jesse) Revell, Amanda Revell, Amanda Frame, Bryan Frame, Courtney Frame and several nieces, nephews and cousins.

His family will receive friends at Brennan-Mathena Funeral Home on Saturday, May 7th  from 11:00 a.m. to 12:30 p.m. at which time a rosary will be prayed.  A Memorial Service will begin at 1:00 p.m. with military honors to follow.  Inurnment will be held at a later date in the Leavenworth National Cemetery.

Memorial contributions may be made in his memory to the Brennan-Mathena Funeral Home to assist his family.  In lieu of cut flowers his family suggests garden plants that can be placed in a memorial garden to remember him at his sister’s home.

To order memorial trees or send flowers to the family in memory of Christopher Allen Thompson, please visit our flower store.