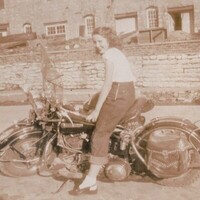 She was born the daughter of Russell Orr McKinley and Ruth Lucille Wright (Gray) McKinley on December 24, 1932, in Red Oak, IA.

On November 21, 1948, Carol married Grover C. Wilson in Liberty, Missouri. Together, they shared 64 years of marriage before Grover’s passing on April 5, 2013.

Carol loved to crochet and spend time with family especially, her grandchildren and great-grandchildren.

She was preceded in death by her parents; and one grandson, Travis Jon Brooks and three brothers, Robert “Bob”, Richard, and Russell Lee McKinley.

Carol was laid to rest next to her husband, Grover, at the Mt. Hope Cemetery in Topeka, KS.

To order memorial trees or send flowers to the family in memory of Carol Marie Wilson, please visit our flower store.