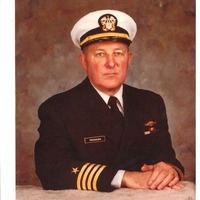 He was born on September 19, 1930 in Ellsworth, KS the son of Emil George and Mona (Silver) Prochaska.

Captain George was a 1948 graduate of Ellsworth High School.  George would serve his country with pride and have an extensive military career.  His career began in 1948 as an Army ROTC Cadet at the University of Kansas.  This was followed by a year in the Air Force ROTC Program and then he entered the United States Naval Academy at Annapolis, Maryland, graduating in 1954.  His naval duties include service on the Destroyer USS Strong (DD-758) for two years. On June 23, 1956 he married Kathleen Lawrence in the Navy chapel in Washington, DC., followed by Submarine School at New London, Connecticut.  He then served on the Submarine USS Carp (SS-338) stationed at Pearl Harbor.  Captain Prochaska resigned from active duty in 1960 joining the Naval Reserve where he served in many positions of responsibilities for twenty years, retiring in 1980.  Upon leaving active duty, he worked for Sperry Rand with Submarine Polaris Navigation Systems and then Grumman Aerospace with duties related to F-14 aircraft.  In 1970, he joined New York Telephone and returned to Kansas in 1977 transferring to Southwestern Bell from which he retired in 1991.

Captain Prochaska holds a BS Degree in Engineering from the US Naval Academy in Annapolis, Maryland and a MBA Degree from Hofstra University.  He was a proud Eagle Scout and a member of the KU Phi Kappa Sigma Fraternity.

Captain George was a member of Most Pure Heart of Mary Catholic Church, Topeka and KC Ski Clubs, Military Officers Association of America, Kaw Valley Chapter and Topeka Retired Officers Association.  He enjoyed skiing, aerobics, tennis, reading, and was an avid KU Jayhawk Basketball and Chiefs football fan.  He and his wife Kathleen enjoyed traveling throughout the United States and abroad.

He was preceded in death by his parents, a sister, Carol Larsen and a grandson, Paul DeLay in 2018.

He will lie in state at the Brennan-Mathena Funeral Home on Wednesday, October 28th from 4:00 until 7:00 p.m. with a Rosary to be prayed at 5:00 p.m.  Mass of Christian Burial will be celebrated at Most Pure Heart of Mary Catholic Church on Thursday, October 29th, at 10:00 a.m.  Burial with military honors will be held at the Ellsworth Memorial Cemetery in Ellsworth, Kansas at a later date.

Memorial contributions may be made in his memory to Most Pure Heart of Mary Catholic Church and sent in care of Brennan-Mathena Funeral Home, 800 SW 6th Ave., Topeka, Kansas 66603.  Online condolences and fond memories may be left at www.brennanmathenafh.com.

To order memorial trees or send flowers to the family in memory of Captain George Emil Prochaska, please visit our flower store.