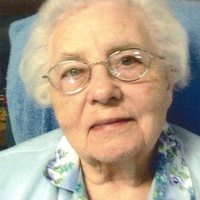 Armella Pfeifer, nee Unrein, 93, of Topeka, Kansas was born September 23, 1925 in Bazine, a small rural community in Western Kansas. She was the youngest of six children born to Alex and Mary Eve Unrein.  When she was three years old the family moved to Sterling Colorado where they farmed sugar beets and grain.  In later years the family became dairy farmers.  She died November 21, 2018 with her family at her side.

She was proud of her German Catholic heritage and known for her tremendous love of family and steadfast faith in God and the power of prayer.  She loved making every event a special occasion for her children and grandchildren, dedicating her life to creating a loving home for family.  Family and friends were always welcomed with homemade meals.

Mrs. Pfeifer worked at Woolworth’s and Hygienic Cleaners, but found her true niche in life when she started a cake decorating business.  She baked and decorated hundreds of delicious wedding and special occasion cakes over the years before retiring in 1992.

She was a Charter Member of Christ the King Catholic Church where she served as sacristan for many years and faithfully fulfilled her hour of adoration each week.  She was also a member of the Daughters of Isabella Little Flower Circle #504, the Third Order of St. Francis and the Topeka Arts Cake Club.

At the age of 80 she battled cancer, enduring multiple chemotherapy treatments.  Her courage, remarkable physical and spiritual strength, and above all, her faith, helped her win the battle.  She was an inspiration to all who knew her.

Armella will lie in state after 2:00 p.m. Monday at Brennan-Mathena Funeral Home where her family will receive friends from 4:30 until 7:00 p.m. The Daughters of Isabella will pray the rosary at 4:30 p.m. and a Parish Rosary will be prayed at 7:00 p.m.  Mass of Christian Burial will be celebrated at 10:00 a.m. Tuesday at Christ the King Catholic Church.  Burial will follow at Mount Hope Cemetery.

To order memorial trees or send flowers to the family in memory of Armella Pfeifer, please visit our flower store.