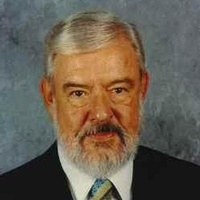 Thomas Ervin Robinson died on March 8, 2017.  He was born in Kansas City, Missouri on September 25, 1933, the son of William Ervin “Jug” and Aunetia (Moffit LaMothe) Robinson.  Thomas won two scholarships to the Art Institute of Kansas City, Missouri in 5th and 6th grade.  He attended high school at De La Salle Military, Paseo High and Washburn.  He served in the US Navy aboard the USS Walker DDE517.  Thomas married Joan Lee Davis on September 11, 1953 in Kansas City, Missouri.  They later divorced.  He worked for the US Army Corps of Engineers in Kansas City, Missouri, and at Howard, Needles, Tammen and Bergendoff Engineering Firm in Kansas City, Missouri until moving to Topeka in 1976.  While in Topeka, he worked for the Kansas Department of Transportation and retired as an Artist for the Kansas Department of Health and Environment in 1994.  Thomas also owned and operated the North Star Supper Club.  Thomas was an accomplished Artist working in mediums of pencil, watercolor, models and miniatures, scribe coat, portraits, pamphlet covers, brochure covers, invitations, business cards, audio visuals, bookmarks, promotional materials, 3D decorations, wood and paper Mache, books, prospective drawings, comics and caricatures, and posters.  He taught water colors.  His drawings included several governors and two past attorney generals.  Thomas was a member of the American Legion Capitol Post #1, and Most Pure Heart of Mary Catholic Church.  He is survived by a son, daughter and four grandchildren.  Mr. Robinson was cremated.  A graveside service will be Friday, March 17th, at 10:30 a.m. at Penwell-Gabel Cemetery.

To order memorial trees or send flowers to the family in memory of Thomas Ervin Robinson, please visit our flower store.