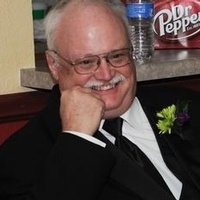 Robert Wayne Good, 62, of Berryton, Kansas entered into eternal rest on March 25, 2017 at the House at Midland Care surrounded by his family.

He was born on February 1, 1955 in Coffeyville, Kansas, the son of Norman Laurence and Pat Ruth (Strope) Good.

He served in the U.S. Navy aboard the USS Savannah.

Robert attended Vo Tech where he studied Electronics. He was a Ham Radio Operator where his call letters were WM0U. He enjoyed working with computers, fishing, hunting, grilling and frying turkeys, spending time with his family and spoiling his granddaughter.

He was a member of Grace Community Church, the Osage Amateur Radio Club and a former member of the American Legion.

Robert worked for United Sates Postal Service as a warehouse clerk, retiring in 2009.

Robert will lie in state at Grace Community Church on Tuesday where the family will receive friends from 6:00 until 8:00 p.m. Funeral Services will be held on Wednesday at 1:00 p.m. at the church. Interment will follow in the Overbrook Cemetery, Overbrook, Kansas.

Memorial contributions may be made in his memory to Grace Community Church or the Salvation Army and sent in care of Brennan-Mathena Funeral Home, 800 SW 6th Ave., Topeka, Kansas 66603.

To order memorial trees or send flowers to the family in memory of Robert W. Good, please visit our flower store.