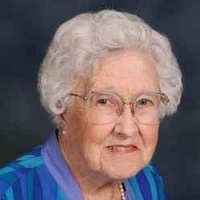 She was born September 27, 1919 in rural Shawnee County the daughter of James and Lena (Siebert) Van Hole.

Marcella was a life-long member of Assumption Catholic Church and recently attended St. Matthew Catholic Church. She was a member of the Daughters of Isabella Little Flower Circle #503, she was a 10 year member of the Coast Guard Auxiliary, where she held many offices and was honored with a permanent membership. She was an honorary member of the Winnebago Travel Club since 1981 and a former member of the Women of the Moose. She and her late husband, Don, traveled extensively including the island of Okinawa and several foreign countries. They visited Hawaii and Alaska, which concluded visiting all 50 states. They attended several Square Dance Clubs and were accomplished ballroom dancers and enjoyed dancing to all of the big bands that played at the Meadow Acres Ballroom in Topeka. One of her many hobbies was oil painting scenery and she was an excellent pianist.

Marcella married Don Melton on April 14, 1941 at Assumption Catholic Church in Topeka. He preceded her in death on March 14, 2008.

She is survived by a daughter, Celia Sue (Charles) Laird of Tecumseh and a daughter-in-law, Elizabeth Melton of Loveland, CO, along with five grandchildren, Dr. Tim (Rosemary) Laird, Dan (Suzanne) Laird, Michael (Catherine) Laird, Alex Mastema, Katherine (Nick) Janda and thirteen great-grandchildren. She was preceded in death by a son, Gary Melton, on February 13, 2008 and a grandson, Patrick Laird, on August 1, 2015.

Mass of Christian Burial will be celebrated at 10:00 a.m. Tuesday at St. Matthew Catholic Church. Burial will follow in Mount Calvary Cemetery.

In lieu of flowers, memorial contributions in Marcella’s memory may be made to St. Matthew Catholic Church Capital Campaign and sent in care of Brennan-Mathena Funeral Home, 800 SW 6th Avenue, Topeka, KS 66603.

To order memorial trees or send flowers to the family in memory of Marcella L. Melton, please visit our flower store.