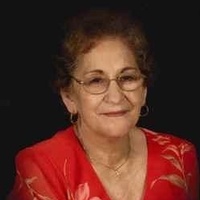 Alicia Martinez, 92, of Topeka, KS died July 10, 2017 in the comfort of her home surrounded by her family. She was born April 5, 1925 in Los Angeles, California the daughter of Raymond and Luciana (Comaduran) Arevalo. Alicia was a lifelong member of Our Lady of Guadalupe Catholic Church, Legion of Mary, the Altar Society, the Third Order of St. Augustine and was recognized as “Mother of the Year”. She was a volunteer for Let’s Help Inc. Alicia worked at Headstart as a Teacher’s Aid and had worked for St. Francis and Stormont-Vail Hospitals. She married Jesus Marquez Martinez in September of 1946 in Lawrence, Kansas. He preceded her in death on August 5, 1993. Survivors include six sons, Raymond Martinez, Frank Martinez, Joseph (Terry) Martinez, Pablo Martinez, Alfred Martinez, David (Suzi) Martinez all of Topeka, three daughters, Rosie (Michael) Sanders of Kansas City, MO, Theresa (Mel) Meier of Topeka and Christina (Steve) Haid of Meriden. She is also survived by 23 grandchildren, 43 great- grandchildren and 33 great-great grandchildren.   Alicia was preceded in death by a son, Louis Martinez, two brothers, Frank and Pete Arevalo, and two grandsons, Frank Martinez Jr. and David Martinez Jr. Alicia will lie in state after 4:00 PM Sunday, at Our Lady of Guadalupe Catholic Church where the family will receive friends until 8:00 PM. A Legion of Mary Rosary will be prayed at 6:00 PM. Mass of Christian Burial will be celebrated at 10:00 AM, Monday, July 17th at the church. Burial will follow in Penwell Gabel Memorial Park Cemetery. In lieu of flowers the family suggests contributions to Interim Healthcare Hospice, sent in care of Brennan-Mathena Funeral Home, 800 SW 6th Avenue, Topeka, KS 66603.

To order memorial trees or send flowers to the family in memory of Alicia Martinez, please visit our flower store.

Our Lady of Guadalupe

Our Lady of Guadalupe