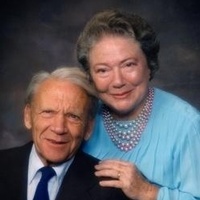 John Brydon Adam, of Topeka, Kansas, died October 21, 2017 at his daughter’s home in Topeka. He was born in 1921, Tulsa, OK, the son of Francis Henry and Janet (Brydon) Adam.  John married Jennie in 1949. She predeceased him in 2008.  He loved to fly and was a Marine Corps fighter pilot in the South Pacific during World War II. He graduated from Heald College with a Bachelor’s Degree in Electrical Engineering. He eventually retired from the Marine Corps. and Marine Reserves on April 1, 1962.  John worked at multiple aerospace companies as an Electrical Engineer for many years.  His love of travel took him on many trips across the country, where he would drive for miles. John could troubleshoot and fix anything, along with fixing and overhauling automobiles throughout the years. He was always there for his friends and neighbors willing to help with any electrical work in their homes. John had an easy-going attitude, and a fun sense of humor. He enjoyed long walks, researching family genealogy, as well as outdoor family activities. He was also an avid reader and knew nothing of “idle time.”  John was very spiritual and a devout member of the Church of Jesus Christ of Latter Day Saints and served as a Temple Ordinance Worker in several cities.  John is survived by eight children: Frank Adam, of Santa Cruz, CA, Mark Adam, of Stockton, CA, Rebecca (Bob) Clawson, of Topeka, KS, Michael Adam, of Stockton, CA, Debora Adam (Allen Keller), of Perry, UT, Julie (Tim) Goyette, of Hooksett, NH, Johann (Margaret) Adam, of Seattle, WA, and James Adam, of Des Moines, IA, along with numerous grandchildren and great-grandchildren. He was also predeceased by an infant son, Gregory.  John will be interred in Fort Sill National Cemetery in Elgin, OK next to his wife, with full military honors.  In lieu of flowers, memorial contributions may be made to the Humanitarian Relief Fund of the Church of Jesus Christ of Latter Day Saints sent in care of Brennan-Mathena Funeral Home, 800 SW 6th Ave., Topeka, Kansas, 66603.  Fond memories and condolences may be left at www.brennanmathenafh.com.

To order memorial trees or send flowers to the family in memory of John Brydon Adam, please visit our flower store.