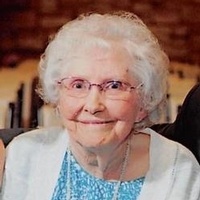 She was born January 24, 1930 in Bigelow, KS, the daughter of Earl Oliver and Carrie Arbutus (Parmentier) Jones.

Lois graduated from Frankfort High School in 1947. She later moved to Lawrence, where her cousin, Eileen, introduced her to Bryce, her future husband. Bryce was a student at Baker University and Lois was a telephone operator for Southwestern Bell.

Lois enjoyed sewing and was an accomplished seamstress, making clothing for her daughters through all of their years in school. Gardening was a hobby she shared with Bryce for most of their married life. In recent years, Lois found pleasure in family genealogy and jigsaw puzzles.

She was the perfect example of a fifties and sixties housewife. She focused on raising the children and keeping the house neat and kitchen smelling of home-cooked meals. Lois was always supportive of her family’s endeavors. She never missed a recital, concert, or play. She served as a Girl Scout leader and frequent room parent.

Family was always a priority with Lois, including her extended family. Many weekends were spent with Stallard or Jones family members, giving the children time with their cousins. Lois was especially close with sisters Melba and Leona. She treasured visits with Melba and frequent phone calls with Leona. Stories she shared about her brothers and sisters always gave an extra spark to her smile.

The family will receive friends from 10:30 am until 12:00 pm Saturday at Brennan-Mathena Funeral Home followed by a funeral service at noon. Interment will take place immediately following the service in Underwood Cemetery in rural Jefferson county.

To order memorial trees or send flowers to the family in memory of Lois Mae Stallard, please visit our flower store.