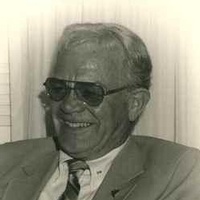 Charles “Bill” Dickey, 97, of Topeka, died peacefully on December 20, 2017. He grew up in Wytheville, Virginia and reared by Charles W. and Lula (Bourne) Dickey.

He married Glada I. “Cossie” Costello in Bristol, Virginia on January 15, 1944. She predeceased him on September 16, 2008. A granddaughter, Lisa also preceded him in death. Bill is survived by four children, Patrick (Jane) Dickey of Topeka, Ann (Mike) Betty of Tecumseh, Michael (Lorrie) Dickey, Mark Edward Dickey of Topeka along with five grandchildren and eleven great grandchildren.

Bill graduated from Wytheville High School in 1940, and set the Virginia high school record in the javelin his senior year. A track scholarship to William and Mary University, Virginia, was interrupted by his desire to pursue aviation mechanics and become a pilot. Bill served his country as a pilot and flight instructor during World War II, in the U.S. Army Air Corp. He received his honorable discharge in 1946.

He was a member of the American Legion Capitol Post #1, a lifetime member of the Topeka Capitol City radio control airplane club and as a licensed ham radio operator since 1947 was known as W0EZQ. In 1985 he was featured on the cover of Model Aviation magazine in recognition of his design and build of a radio controlled airplane he called the Four Stroke Rooster. In 1993 Bill was honored by The International Forest of Friendship, Atchison, Kansas, with a granite plaque bearing his name, placed in the forest’s Memory Lane, for his contributions to aviation.

Bill retired after 35 years of working for federal government aviation administration agencies, and finished his career at Topeka Billard Airport where he was an Air Traffic Controller.

In lieu of flowers memorial contributions may be made in his memory to the International Forest of Friendship, Atchison, Kansas, or Explorer Scouts and sent in care of Brennan-Mathena Funeral Home, 800 SW 6th Avenue, Topeka, Kansas 66603.

To order memorial trees or send flowers to the family in memory of Charles Dickey, please visit our flower store.