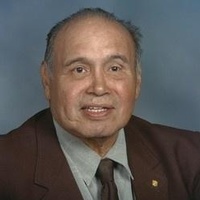 ﻿﻿Sgt. Henry Segura USMC Ret.  Passed away June 12, 2018 at Select Specialty Hospital in Kansas City. Henry was born in Topeka, Kansas, on August 6, 1936, son of Juan and Antonia Segura.
He married Theresa Shufeldt on August 2, 1969, where together they had two sons. They later divorced.
Henry married Wilma Viles Dominguez on January 18 in Lawrence, Kansas. Together they raised his two sons, Michael and Richard Segura both of Topeka, Kansas.
He attended Topeka Public Schools and graduated from Topeka High in 1954. He joined the United States Army Reserve on June 8, 1953. After his tour he joined the United States Marine Corps where he retired on July 30, 1970.
He had a very full life. Stationed in Okinawa, Philippines, Hawaii, China, Wake Island, Guam, and North Vietnam. Henry guarded Madam Nu, Climbed Mount Fuji, and from 1962 to 1965 he road shotgun for pilots from I-Core. He guarded President Eisenhower during his trip to Japan and Okinawa. He loved his country and was very proud to serve.
Henry also worked at Ed Marlings T.V. and Small Appliance Repair from 1970-1973, then went on to work at St. Francis Hospital where he was a maintenance electrician from 1973-1995. He was a member of Wanamaker Seventh Day Adventist Church, and the American Legion Post 31 in Rossville. He loved working on electronics and cars and treasured spending time with his family and helping others.
Henry is preceded in death by both of his parents; his brother John Segura Jr. and his sisters Romona S. Alvares and Rita S. Charay.

He is survived by his wife Wilma of 43 years; his two sons Michael (Pam Cross) Segura and Richard Segura; brother Pete T. Segura and his sister Carolina S. Hernandez; and three step grandchildren, Daniel Jackson, Jared Jackson, and Matthew Cross.
Funeral Services will be 11:00 am Friday, June 15, 2018 at Wanamaker Seventh Day Adventist Church. He will lie in state after 2:00 p.m. Thursday, June 14, 2018. Family will receive friends at Brennan Mathena Funeral Home from 5:00 p.m. till 7:00 p.m. Interment will be held at Mount Calvary Cemetery.
Memorial contributions may be made to the Disabled Veterans Association and sent in the care of Brennan Mathena Funeral Home.
To order memorial trees or send flowers to the family in memory of Sgt. Henry Segura, please visit our flower store.