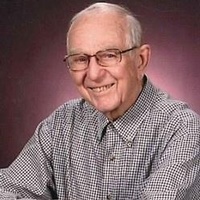 Herb was born April 13, 1921 in Riley County, KS, to Henry and Martha (Wiechman) Bulk. He was the third of five siblings. Herb attended rural schools through the eighth grade, at which point his father instructed him well in the business of family farming, which he assumed would be his lifelong career. In February of 1943, he enlisted in the Army, serving in two fighter squadrons of the Army Air Corps during World War II. Following his discharge in November of 1945, he returned to Topeka. He earned his GED and enrolled at Kansas State University, majoring in Agriculture. He graduated in the summer of 1949 and was hired by the Cooperative Extension Service as an Agriculture Agent. His 35 year career with the Extension Service included positions in Leavenworth and Nemaha counties prior to landing in Shawnee County in 1958. He served 26 years as Agent and Director for Shawnee County, receiving many awards and recognitions before he retired in 1984.

Herb devoted many hours in service to his community and others alongside Mildred. His service activities included Meals on Wheels, numerous activities for Most Pure Heart of Mary church, and serving on various TARC boards. He became an accomplished woodcarver in his retirement years.  Together, Herb and his wife enjoyed traveling within and outside the States. Of particular enjoyment were Elderhostel trips that provided both leisure and learning. As a couple, they gardened extensively and enjoyed their daily walks well into their 80s.

He will lie in state at the Brennan-Mathena Funeral Home on Thursday after 2:00 p.m. where the family will receive friends from 5:30 to 7:00 p.m.  Mass of Christian Burial will be celebrated on Friday at 10:00 a.m. at Most Pure Heart of Mary Catholic Church.  Interment will follow in Mt. Calvary Cemetery where military honors will be held.

In lieu of flowers, family suggests memorial contributions to TARC or Most Pure Heart of Mary Church

To order memorial trees or send flowers to the family in memory of Herbert William Bulk, please visit our flower store.