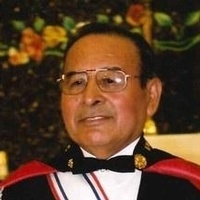 Guadalupe Gonzalez Jaramillo, 92, of Topeka, the Oakland neighborhood, and Our Lady of Guadalupe Church, passed away peacefully Thursday morning, August 16, 2018, at home in his own bed.

Known as both “Lupe” and “Jerry” his entire life, he was born May 18, 1926 in Emporia, Kansas, and was raised in North Topeka and the “Bottoms” neighborhood. He was the son of Pedro Jaramillo and Santos Gonzalez Jaramillo, the oldest of nine children.

His first marriage was to Mary Gutierrez.  They had five children including two sons, Jerry and Robert and three daughters, Alice, Nancy, and Patricia.

He married Aurora (Vita) Rangel Sepulveda on December 22, 1990 in Topeka at Our Lady of Guadalupe Church after a long courtship. Lupe was her partner for more than three decades. He was always by her side and took care of Vita every single day for the last six years of her life as she battled pulmonary fibrosis. Family was the center of their lives with Lupe and Vita traveling more than 400,000 miles to take care of their kids, Juan and Gary Sepúlveda, moving them back and forth from college and work along with family trips to Massachusetts, Texas, California, Mexico, the United Kingdom, France and Italy.  Vita preceded him in death on August 14, 2012 – exactly six years and two days ago.

Lupe loved life!  He especially enjoyed being a part of his church and the community of Our Lady of Guadalupe Church.  Lupe was a Fourth Degree Knight of Columbus, San Juan Diego 4th Degree Assembly, Nate Morales Chapter #11777 and also served as Grand Knight.  Lupe also participated in Adoration chapel until he was 90 years old, often choosing to serve the early morning hours that so that others would not have to.  He was a member of the Cursillo movement.

As a child, Lupe attended Curtis Junior High and Topeka High School.  He left school in the 11th grade to join the U.S. Army to serve our country in World War II.  He was honorably discharged on June 25, 1946 at Fort Sheridan, Illinois.  He received the Good Conduct medal, the American Theater Ribbon, and the Victory medal.

Lupe was a builder. After family, he was most proud of all the building he did in his life.  In fact, Lupe beamed brightest when he would point out another home he and his team built from scratch.  As one of the first small minority business owners he started Pride Construction Company, where he employed skilled minorities from all over the region. As one of the first small businesses working with the Federal Government, Lupe’s building footprint stretched far across Topeka and the state of Kansas and touched a large number of community members.

He retired twice in his working career, first at the Santa Fe railroad shops where he did high skilled woodworking and cabinetry work within passenger trains, and secondly, at the Topeka Veterans Administration (VA) Medical Center where he continued using his deep experience as a carpenter and builder to tackle challenges across the campus.

A natural storyteller, Lupe loved to hold court, spinning his tales until the last days of his life regaling listeners with stories of his uncles who were pirates in the Philippines to his days driving a tank during World War II to all his sports antics – softball, baseball, and football (earning him the nickname “The Assassin”) – to his very opinionated and always up to date take on the current political environment.  He was an avid voter, casting his last ballot from the Brewster Place rehab facility in the most recent primary election.

In addition to his wife, Aurora (Vita), his brothers Cecilio and Julian Jaramillo, sister, Rita Rivera, and his daughter, Patricia Hidalgo predeceased him.  He is survived by five siblings: John, Jesus, and Joseph Jaramillo, Beatrice King, and Maria Dolores Ortiz; four sons, Jerry and Robert G. Jaramillo, Juan and Gary Sepúlveda, and two daughters, Alice J. Nunez and Nancy Lira as well as by 21 grandchildren and 28 great-grandchildren. He will also be greatly missed by his sister-in-law’s family (Carmen Rangel Perez): husband, Rudy Perez, daughter, Desi Perez Gomez, her husband Chris Gomez and their two children: Brianna and Aaron.

Lupe will lie in state at Our Lady of Guadalupe Church, 201 NE Chandler, after 4:00 pm, Monday, August 20, 2018 with a 3rd and 4th Degree Knights of Columbus Rosary and Chalice Ceremony at 6:00 pm followed by a Vigil Service at 7:00 pm.  Mass of Christian Burial will be celebrated on Tuesday, August 21, 2018 at 10:00 am also at Our Lady of Guadalupe Church.  Interment will immediately follow at Mount Calvary Cemetery, 801 SW Westchester Road.

In lieu of flowers the family requests memorial contributions in Lupe’s memory to Our Lady of Guadalupe Church and sent in care of Brennan-Mathena Funeral Home, 800 SW 6th Avenue, Topeka, KS 66603.

Please share your favorite Lupe stories, memories and your condolences at www.brennanmathena.com

To order memorial trees or send flowers to the family in memory of Guadalupe G. Jaramillo, please visit our flower store.