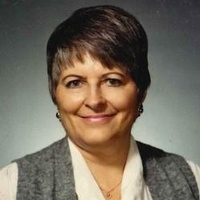 She was born in Moline, Illinois, on April 9, 1930 the daughter of Reverend Frank W. and Juliana (Frederick) Court.

Evelyn had worked as secretary and then Certification Officer and Advisor at Washburn University in the Education Department until her retirement in 1997.

She moved with her family to Lincoln, Nebraska where she attended college at the University of Nebraska.  She was a member of the Alpha Phi Sorority and met her future husband, her lab instructor.  In 1982, Evelyn graduated from Washburn University with a degree in Elementary Education.  She was a longtime member of First United Methodist Church.

Evelyn married Dale N. Anderson on September 9, 1950 in Lincoln, Nebraska.  Her father Rev. Frank W. Court and grandfather Rev. Frank A. Court officiated.  Evelyn and Dale began their married life in San Francisco working at San Francisco State.  After two years the couple moved to Lansing, Michigan where they were the resident supervisors of a dorm housing 600 young men at Michigan State University even though Evelyn was younger than many of the dorm’s residents.  In 1957, they moved to Arcata, California where they lived for ten years and were very active and involved at Humboldt State.  The family made their final move in 1967 to Topeka, Kansas and Washburn University.

Evelyn loved her family and friends, entertaining, cooking and wine.  She was an avid bridge player and belonged to multiple bridge clubs over the years.  Evelyn’s memberships included the Topeka Chapter of the University of Nebraska Alumni Association, the Washburn Alumni Association and the Gourmet Club.

She was a master at knitting and made many lovely sweaters and afghans.  Evelyn was a fan of college football, particularly Cornhusker football.  There were many enjoyable family vacations taken cross-country by car and train.  Later she was fortunate to travel to multiple countries with her traveling buddies. Evelyn and Dale hosted a total of ten family golf tournaments over the years. The golf tournaments were a most anticipated annual event.

She will lie in state at the Celebration Room at the First United Methodist Church at 6th and Topeka Boulevard from 9:00 until 10:30 a.m. on Thursday, September 13th, where her family will greet friends.  Funeral services will follow in the Klasse Chapel at the church at 11:00 a.m.  Cremation will follow with inurnment to be held at a later date.

To order memorial trees or send flowers to the family in memory of Evelyn Louise Anderson, please visit our flower store.